On August 29, Hurricane Ida clobbered Louisiana with 150 mph winds and torrential rains. Nearly three weeks later, residents are still dealing with massive flooding and widespread power loss. But for one storm victim—and his rescuer—something positive has emerged from the wreckage.

Louisiana Air National Guard Captain Ryan Mitchell was searching Lower Plaquemines Parish for survivors two days after the storm made landfall when he and his crew came across a dog in need. The German Shepherd had climbed onto a small wooden platform to escape the floodwaters and become trapped there.

Scared, dehydrated, and surrounded by tainted water, the dog was in a desperate state when Officer in Charge Mitchell and the Plaquemines Initial Search and Rescue (ISAR) boat team scooped him up. The pooch gratefully accepted a drink of clean water as the rescue vessel carried him to safety.

He was taken to a local vet, where he was given a remarkably clean bill of health considering his ordeal. The staff also confirmed that the pointy-eared cutie did not have a microchip. Mitchell, who had grown rather fond of the dog during their boat and humvee rides, decided to make him a permanent family member. He officially dubbed him Caesar after the callsign of the ISAR team’s August 31 rescue mission, “Caesar Ops.”

Caesar made himself right at home with Mitchell and his girlfriend, racking up lots of toys, treats, and new doggy swag. The couple even made Caesar his own Instagram page where fans can check in on his new charmed life. So far, Mitchell has shared photos of Caesar in his new ID tags, a festive Halloween bandana, and an inflatable “doughnut” he must wear as he recovers from his neuter surgery.

Additional photos of the grateful pooch cuddled up with his new mom and dad show that Caesar really is one lucky pup. Mitchell hopes the joyful images will help inspire optimism in storm victims who have lost so much.

“Perhaps this Instagram account can be a place for all those affected by Hurricane Ida to come together and express their emotions,” Mitchell told Southern Living. “Perhaps this can provide a cathartic environment and mitigate feelings of isolation. The goal here is to provide a platform of community cohesion and to show that we’re still spreading the love!”

Mitchell plans to donate proceeds earned through Caesar’s Instagram account towards the dog’s health and the continued disaster recovery efforts.

“I want to ensure that Caesar’s story serves as a beacon of hope in such a seemingly hopeless time. The community deserves to know that we have specialized teams who are immediately present in the community post-disaster,” he said. “In addition to physically saving those who were unable to evacuate, our intent is to provide a layer of psychological comfort for community members during the time between the disaster and their return.”

“No life gets left behind,” Mitchell added. “We’ll risk ours to ensure this remains the case.”

Caesar rode out Tropical Depression Nicholas with his new adoptive pawrents by his side. The storm turned out to be far less powerful than Ida. However, lingering rain showers could lead to dangerous flash flooding on the Gulf Coast.

Our thoughts go out to everyone affected by these devastating conditions. Thankfully, Caesar is one less dog that will have to struggle for survival in Ida’s wake.

To help ensure your dogs stay safe during a hurricane, check out 9 Tips To Prepare You And Your Pets For An Emergency Evacuation.

Soldiers Hope To Save Wounded Dog They Befriended In Afghanistan 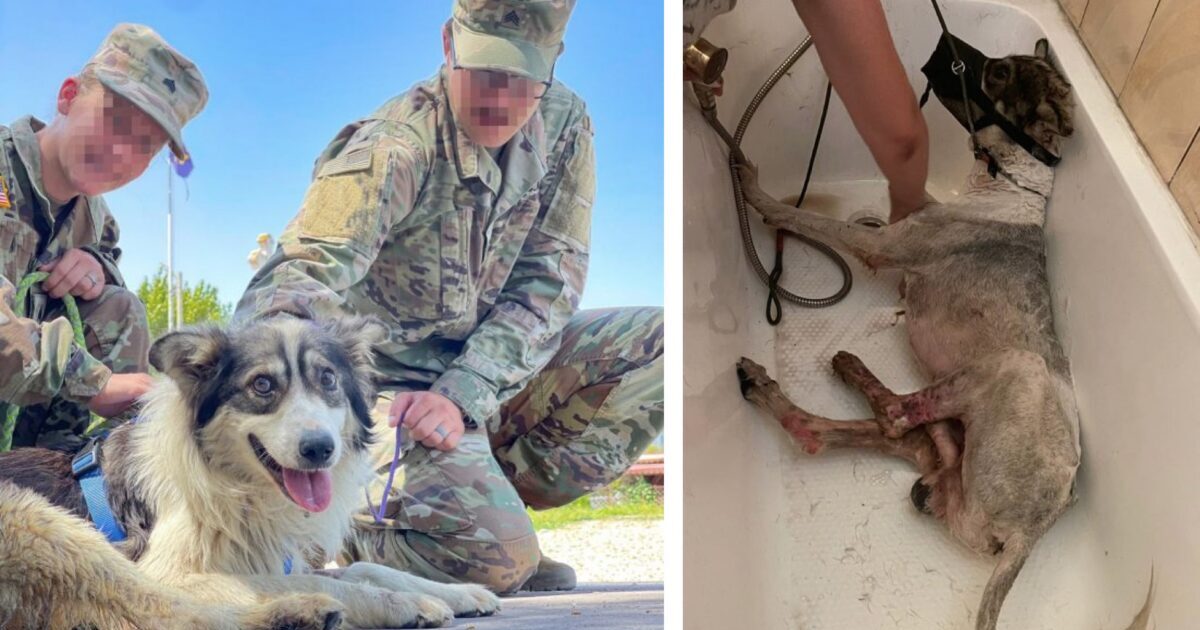