37 U.S. Airports Have Therapy Dog Programs. Does Yours? 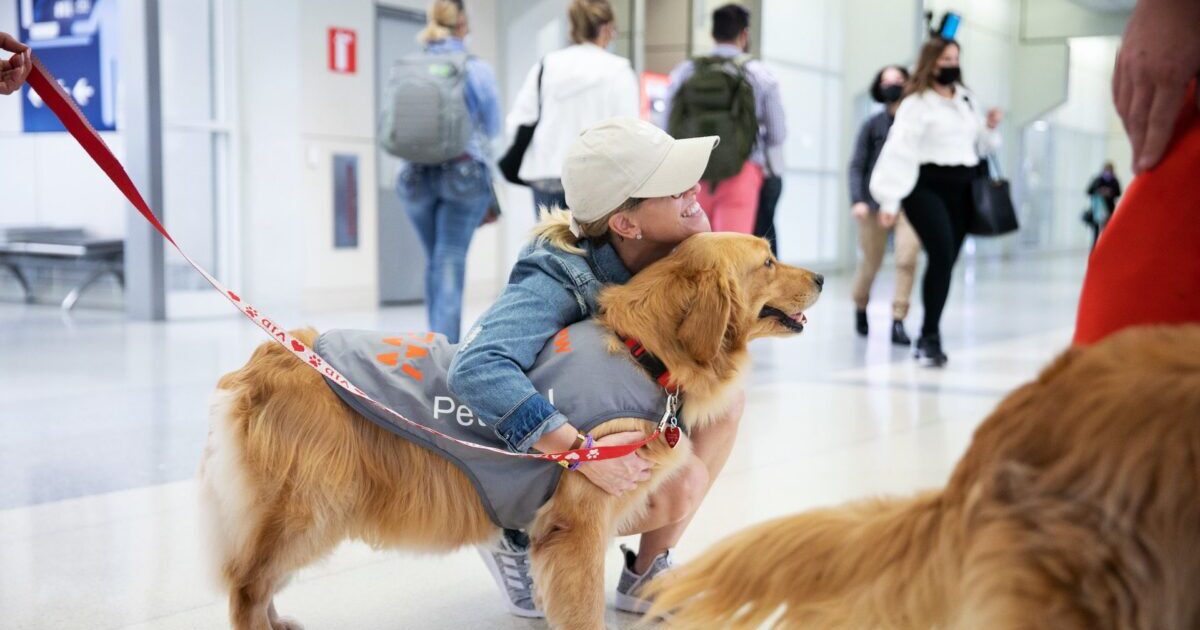 Sometimes even thinking about going to the airport makes my blood pressure rise. Know what’s proven to help ease symptoms of stress and anxiety? Therapy dogs. It only makes sense to place therapy dogs at the airport, one of the more stressful places nearly everyone has to be at one time or another.

Airport therapy dogs have, to everyone’s benefit, become far more common in the last few decades. At airports all across the United States, these certified pups and their handlers bring calm and joy to people traveling.

Researcher and Airport Wellness Advocate Cristina Alcivar underlined the value of a therapy dog’s presence at the airport:

“They create a better experience for passengers. They humanize your experience.”

That’s why Alcivar uses her social media and website to draw attention to these helpful programs and encourage the development of even more.

A History Of Airport Therapy Dogs

San Jose International Airport (SJC) in California was the first airport to bring in therapy dogs shortly after 9/11. As traveler anxiety surged in the wake of the 2001 terror attacks, Chaplain volunteer Kathryn Liebschutz requested to bring her trained therapy dog Orion to work.

The positive impact Orion made at SJC became clear very quickly, so the airport started an official program. The list of certified therapy animals who work at this airport has grown massively since (and you can see that list of sweeties here.)

Los Angeles International Airport (LAX) became the second airport to introduce therapy dogs. That program has come a long way since then. The LAX Pets Unstressing Passengers (PUP) program is now the largest in the country, enlisting 121 therapy dogs.

Alcivar’s research indicated that 87 airports in North America had therapy dog programs before the pandemic hit. Her latest update details the 37 programs that are active at U.S. airports as of August 2021:

A therapy dog can come in all shapes and sizes (and breeds,) but they are all certified by a therapy dog organization before they head to the airport. Another thing they all have in common is a naturally relaxed temperament.

“You can’t train a dog to have this type of temperament; they have to be born with it. Their natural personality is a dog that’s very outgoing and loves people and doesn’t get scared by lots of activities and loud noises.”

Typically, new teams will do a walk-through of the airport before starting work. This allows them to get a lay of the land and their handlers to see how they deal with the noises, smells, and strange people.  After that, the dogs undergo a more thorough vetting and their human handlers also have to go through background and security checks (it is the airport, after all.)

For some reason, unknowable to me, not every airport traveler loves dogs. In acknowledgment of that, the dog/handler teams typically stay in one location in an open area so that the people who want to greet/pet them can and the ones who don’t can avoid them easily.

They also tend to wear vests indicating they’re working therapy dogs. Some airports with these programs even make and hand out collectible cards featuring their therapy dogs.

“My very first day — I’ll never forget it — we sat with a passenger in tears. She was so scared and nervous … I sat with her for a while and she just sat there and was petting [Juno] just talking, trying to pass the time.”

“We expected that kids would like the dogs, but even more, it’s the adults benefiting from them. They pull out photos of their own dogs; talk about ones recently lost; take selfies; ask the name, age and breed of the dog … lots of questions.”

A Community Of Dog Lovers Forms At The Airport

CLT Canine Crew is an all-volunteer operation, but Golden is constantly recruiting and finds volunteers easily. She added that since the dogs tend to create a gathering or an audience, a small community forms at the airport of people talking to each other, and even sharing stories and photos of their own dogs.

The latter point about community is something that PUP’s Heubner agrees with. Heubner told The Bark in 2016:

“The dogs bring strangers together. We’re often afraid to talk, or are on our devices, but with the dogs, people are sharing stories and photos of their own dogs, talking about where they’re going. I never get tired of watching them. Sometimes my face hurts from smiling so much, watching them in action and listening to what the passengers are saying.”

Another benefit Heubner pointed out is how easily people can forgive the worst aspects of travel when they get to hug a dog.

“One day, a flight was cancelled. A flight attendant asked if one of the dogs could visit with the passengers. The passengers loved it, were saying, ‘Who cares that we’re delayed! It was worth it to see the dogs.’”

I’d choose to pet a dog to ease my travel woes over an $18 airport cocktail any day!